grey whale, or gray whale (in the United States); nicknamed “devil fish” for their aggressive reactions when harpooned by whalers

Grey whales only occur in the Pacific Ocean, and were hunted to extinction in the Atlantic Ocean. Grey whales are typically found in shallow coastal waters that are around 20 m deep. There are currently three recognized grey whale stocks—Eastern North Pacific, Pacific Coast Feeding Group, and Western North Pacific populations.

The Eastern North Pacific (ENP) population breeds in the lagoons of Baja Mexico in the winter, and migrates along the western coast of North America to feed in the Bering, Chukchi, and Beaufort Seas in the summer. The majority of this population does not feed during the migration, but there are some notable exceptions. There is a small group of 13 grey whales from the ENP known to researchers as the North Puget Sound (NPS) grey whales that enters the Puget Sound to feed between March and May before continuing north to feed in the Arctic foraging grounds for the summer.

A subset of the ENP known as the Pacific Coast Feeding Group (PCFG) do not make the complete migration from the winter breeding lagoons in Baja Mexico to the Arctic summer foraging grounds—rather they remain in the waters off the Pacific Northwest for the duration of the summer. This group has been recognized as a unique feeding aggregation and is considered a distinct management unit in Canada by the Committee on the Status of Endangered Wildlife in Canada and the Species At Risk Act.

The Western North Pacific (WNP) population is thought to breed in the South China Sea, with some individuals wintering in the lagoons of Baja Mexico. They feed off the coast of Sakhalin Island and the Kamchatka Peninsula during the summer.

Average lifespan is unknown, although it is thought to be between 55-70 years. One female was reported to be 75-80 years old.

Sexual maturity is thought to be reached between 6-12 years old.

Grey whales are easily spotted on the water by their trademark heart-shaped blows. Grey whales are generally quiet whales, not known for their songs. Although they tend to make loud, low-pitched clicks, moans and whistles between 100-2,000 Hz later in the foraging season, on the southbound migration, and in the breeding grounds. Breaching, fluke slaps and spyhopping, where the whale’s head is above the water, are also used to communicate. In the breeding lagoons, many whales will approach boats and allow tourists to touch them. This has led to many people flocking to Baja Mexico to catch a glimpse of these friendly whales.

Grey whales are benthic suction feeders. They usually rolling onto their right side, and use their tongue to loosen and scoop up the sediment on the bottom of the ocean and suck up the invertebrate prey. This foraging behaviour leaves feeding pits that are about 1m long and 2m wide. These benthic feeding pits are commonly observed in the North Puget Sound and Arctic foraging grounds. The wide variety of prey in the Pacific Northwest foraging ground leads to a wide variety of foraging behaviours that depend on the small-scale foraging habitat and other unknown factors.

Grey whales in the Arctic and northern foraging grounds primarily feed upon benthic invertebrates, such as ampeliscid amphipods. In the Pacific Northwest foraging range, the primary prey is mysid shrimp. However, PCFG grey whales have a more flexible diet, and have been shown to consume herring roe, pelagic crab larvae, amphipods, small clams, ghost shrimp, and euphausiids.

Transient killer whales, and less commonly sharks, will attack grey whale calves, which is why grey whales are thought to give birth in the shallow waters of the breeding lagoons where the young are not as exposed to orcas. Killer whales will ram the calf to separate it from its mother and hold it underwater until it drowns. These attacks usually occur during the northbound migration from the breeding lagoons.

Grey whales give birth to one calf every 2-3 years. The gestation period is 13.5months with mating occurring in late November or early December so that the calf can be born in the warmer waters of the winter breeding habitat.

The Eastern North Pacific stock was approximately 20,000 individuals when surveyed in 2020. 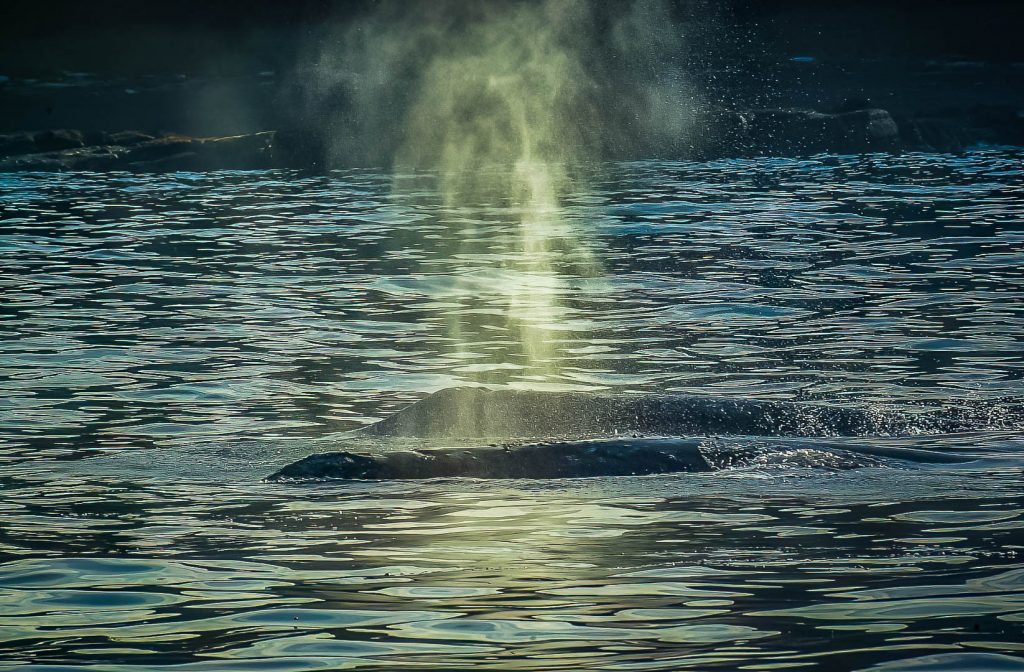 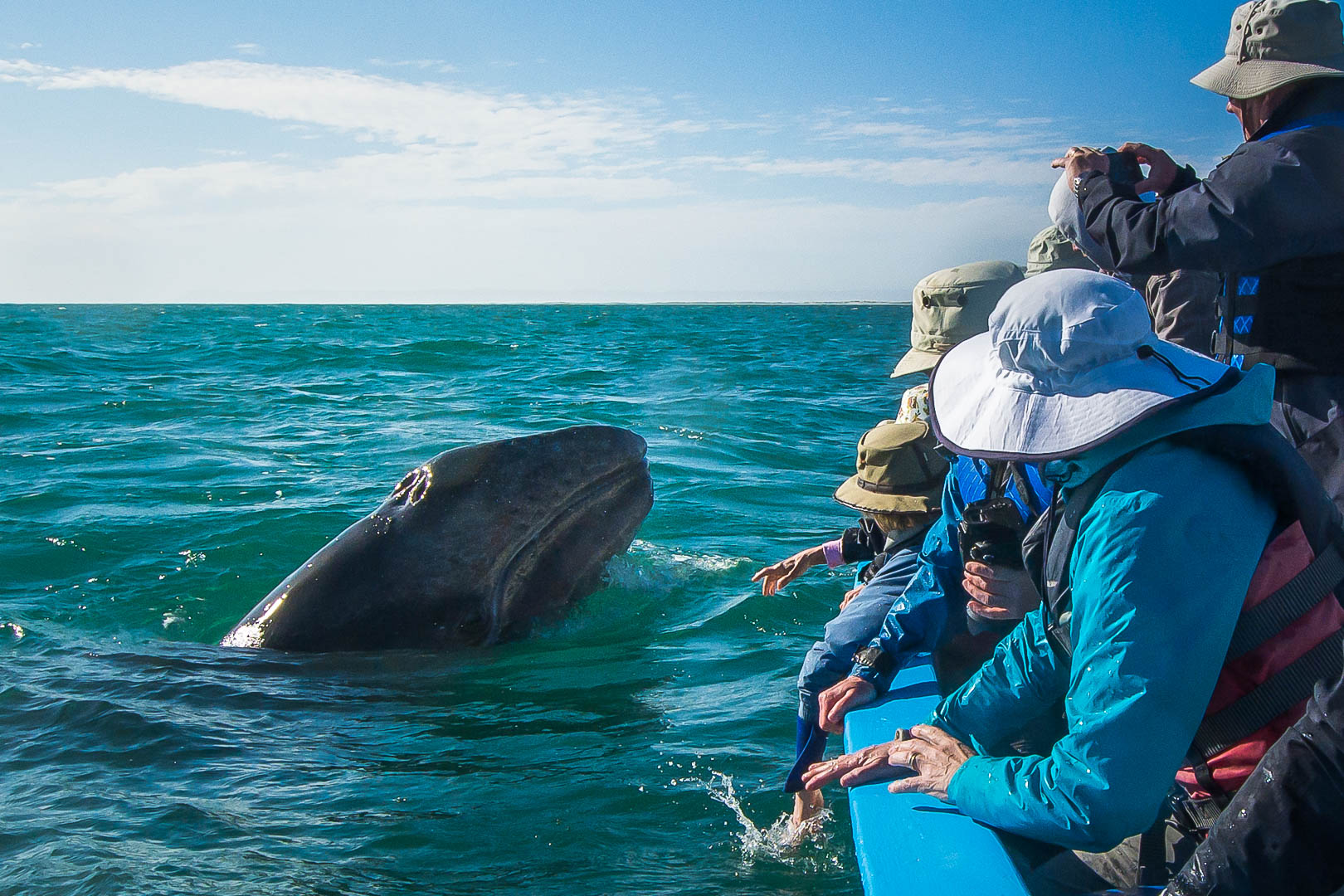 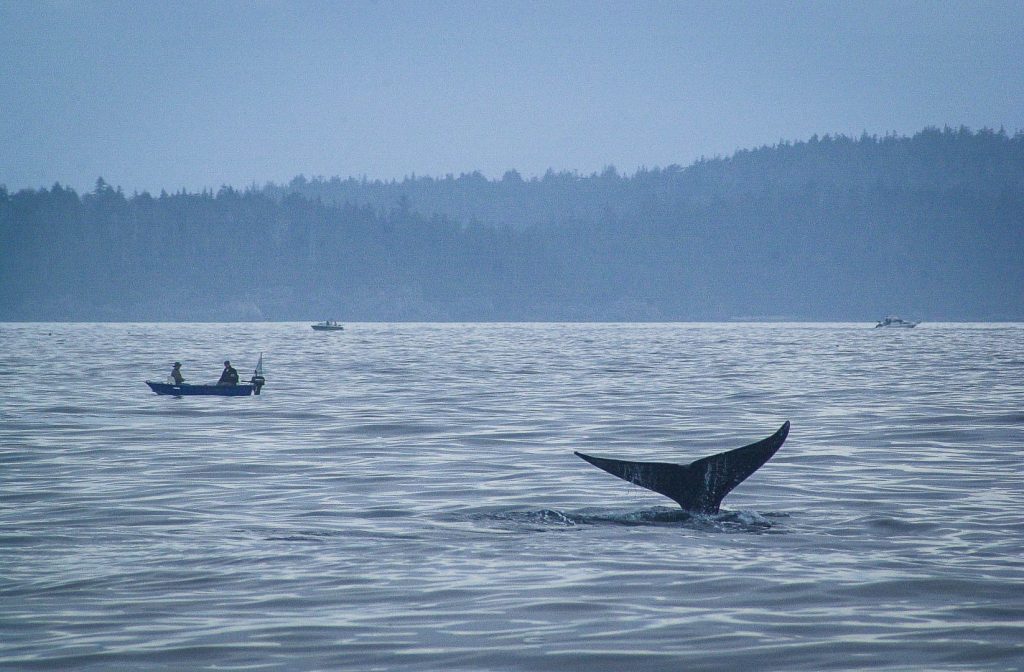 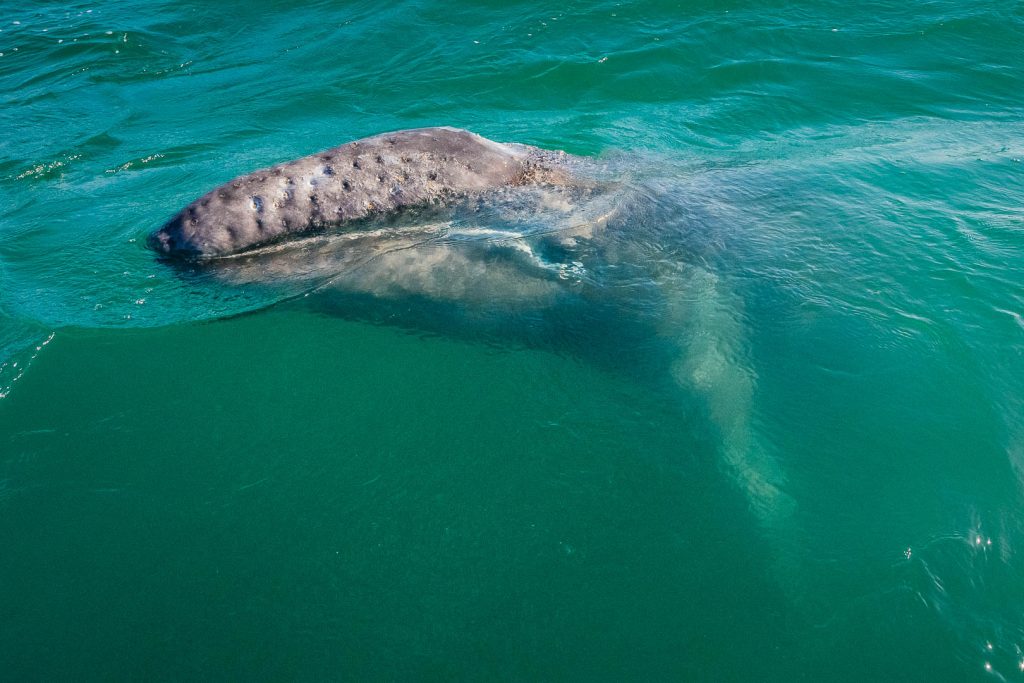