Researchers found four to six times more Chinook salmon in the Salish Sea during the summertime compared with the numbers of fish available to the growing population of northern resident killer whales. 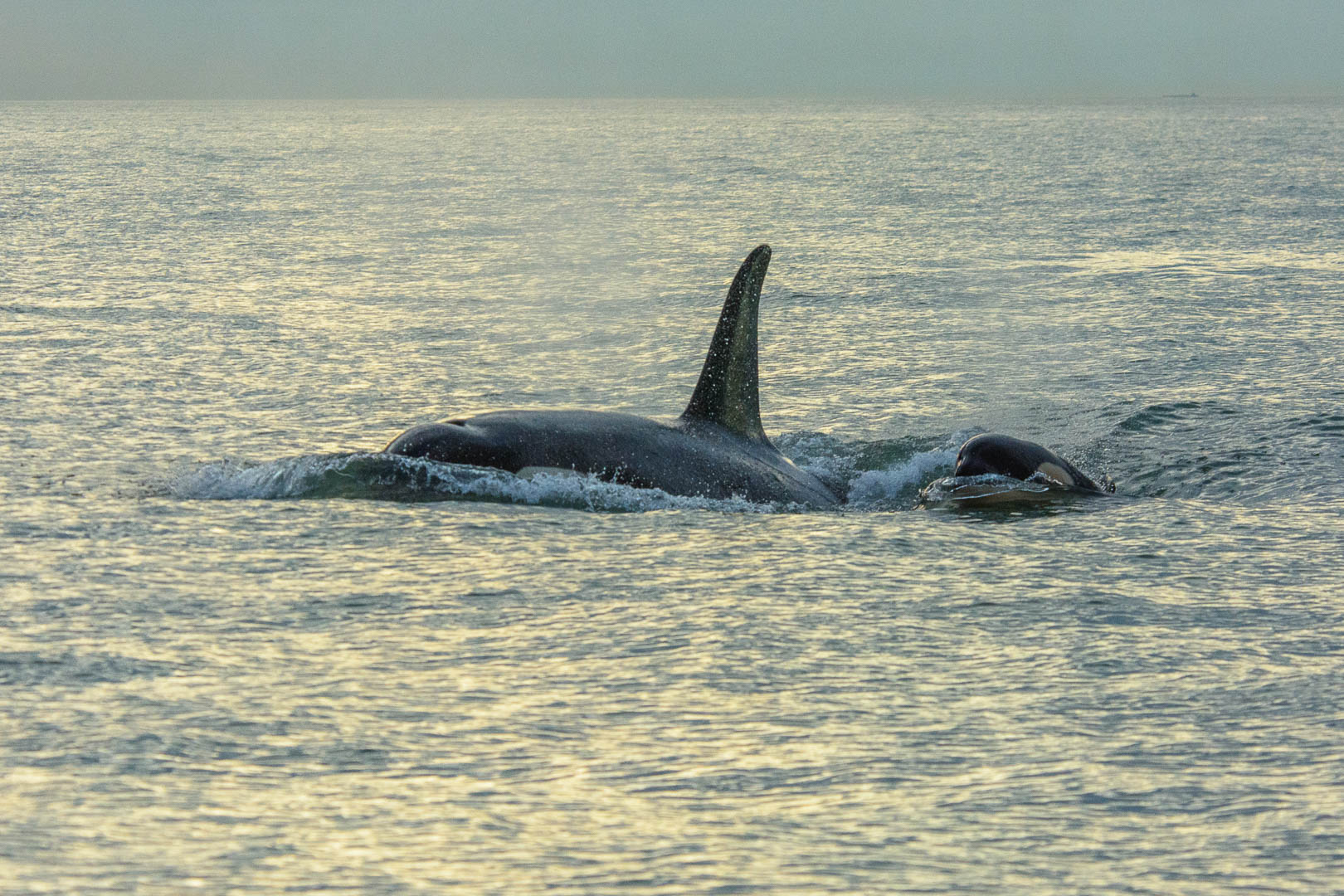 A young southern resident killer whale calf (J56) carrying a dead fish between her teeth while swimming next to her mother (J31) in the Salish Sea. (photo A.W. Trites, University of British Columbia).

Despite the common belief that there are fewer Chinook salmon available during the summer for the declining southern resident killer whales to consume in the Salish Sea compared to the densities of fish available to the growing population of northern resident killer whales, scientists at the University of British Columbia and Fisheries and Oceans Canada have discovered the opposite. 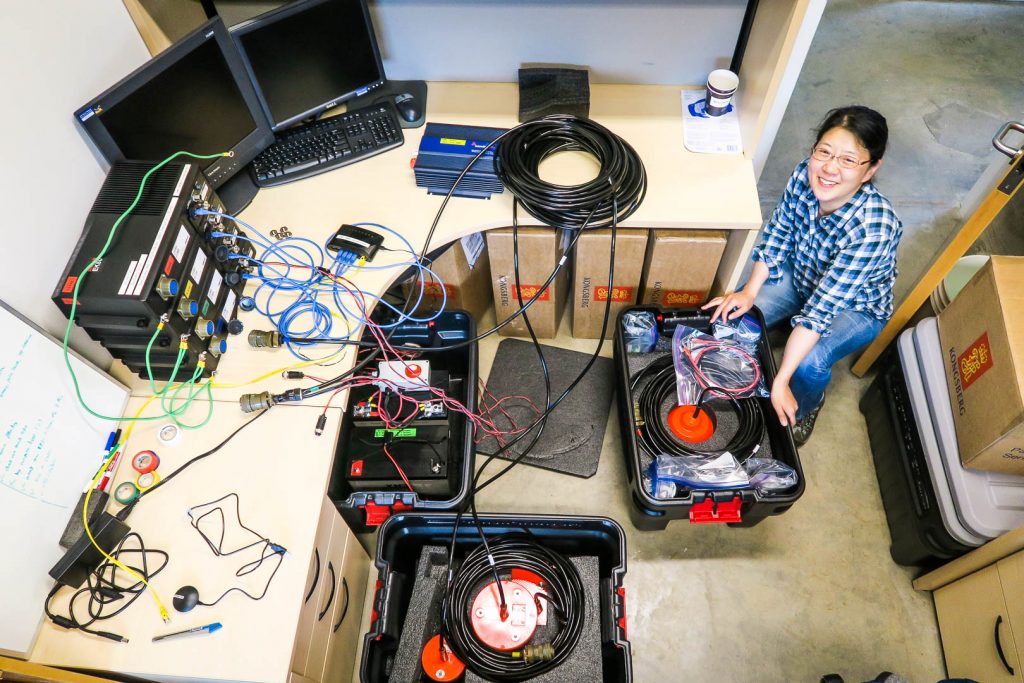 “People have been talking about a prey shortage as if it’s a fact, but this is the first study to quantify and compare the amount of Chinook salmon available to both southern and northern resident killer whales,” said lead author Dr. Mei Sato, a Research Associate at the Institute for the Oceans and Fisheries at UBC at the time of the study and now an Assistant Scientist at Woods Hole Oceanographic Institution. 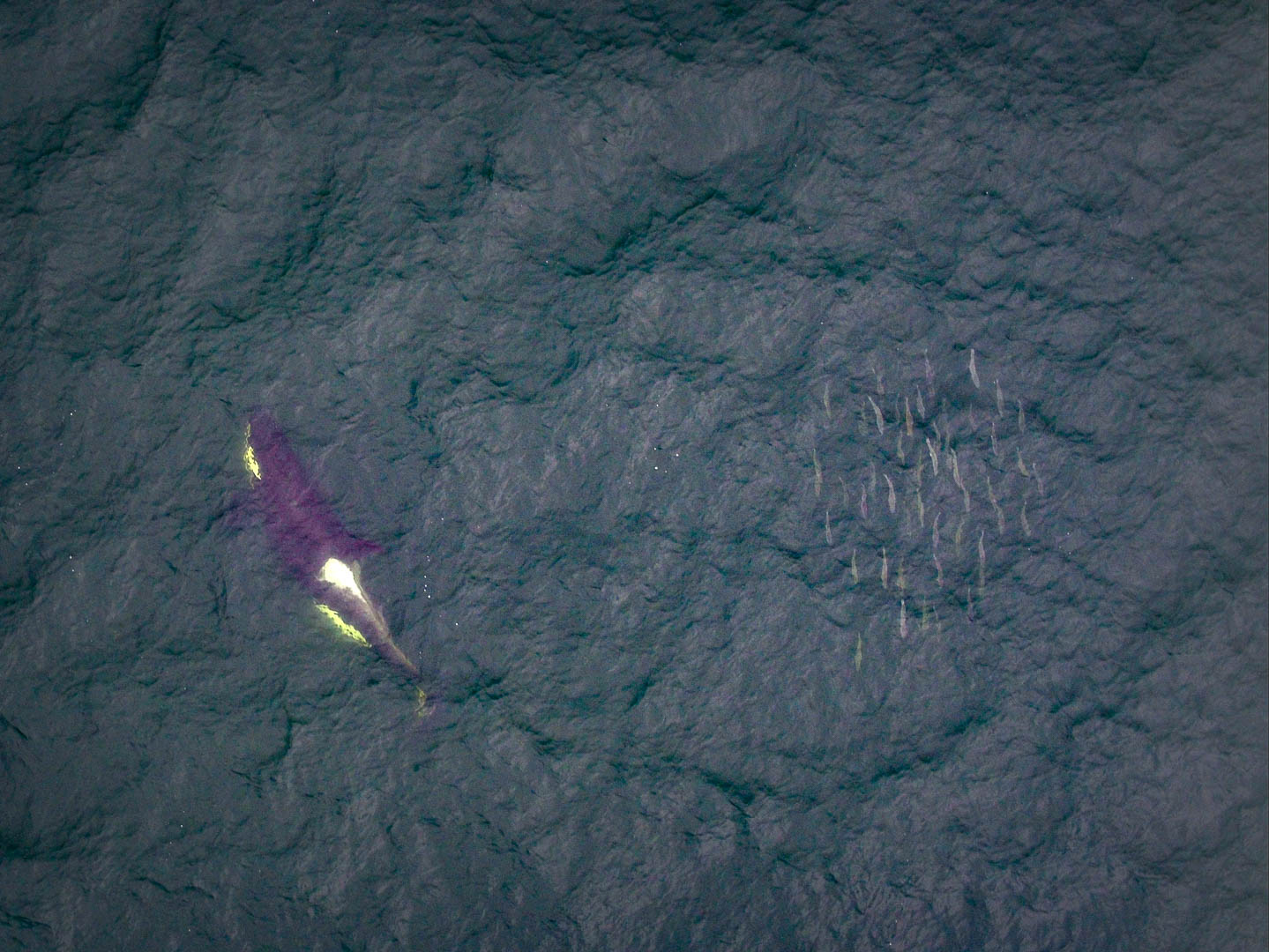 A southern resident killer whale swimming past a school of salmon near the mouth of the Fraser River. (photo. K. Holmes, Hakai Institute and University of British Columbia).

“Measurements from drone footage have shown the southern resident killer whales are thinner on average than the northern residents — which supports the conclusion that the southern residents are experiencing a food shortage,” said co-author Dr. Andrew Trites, a Professor and Director of the Marine Mammal Research Unit (MMRU) at the Institute for the Oceans and Fisheries at UBC. “Our findings suggest that this food shortage is probably not occurring during the summertime when they have traditionally fed in the Salish Sea.” 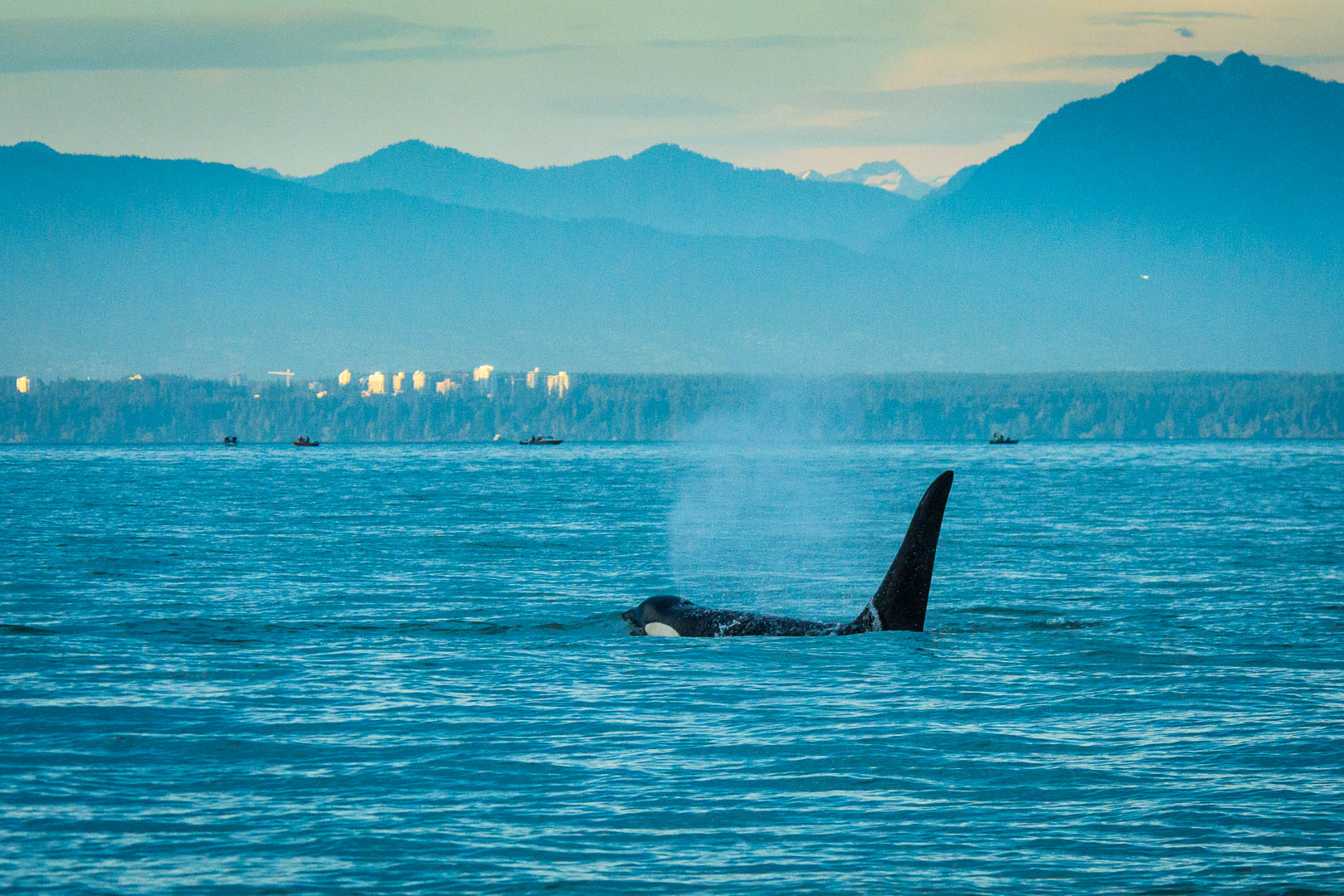 Using state-of-the-art fish finders, the team compared the number and size of Chinook salmon in the two straits. 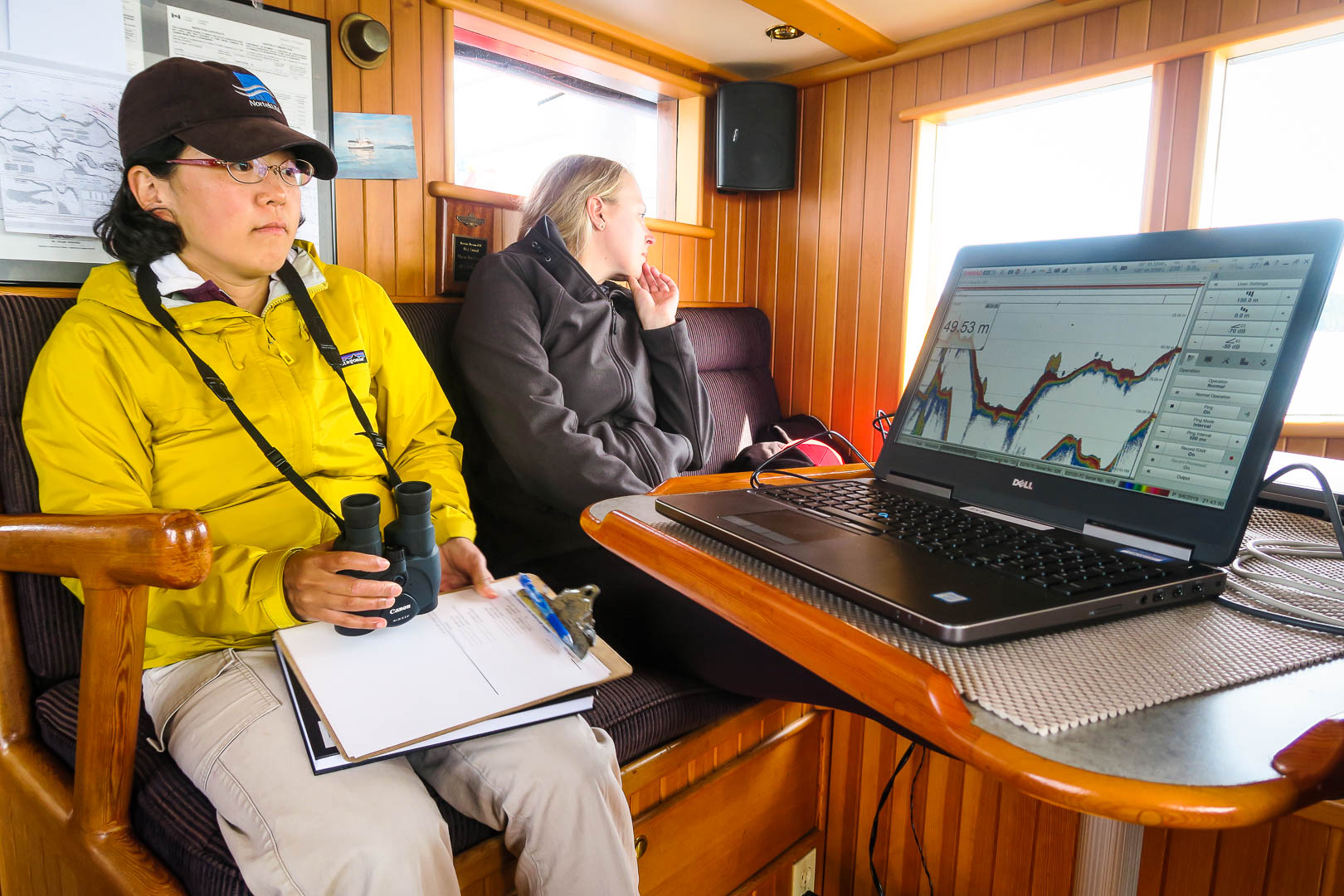 Dr. Sato watching the prey assessment data streaming onto her laptop from the waters below the research vessel. (photo A.W. Trites, University of British Columbia)

The team collaborated with sport and commercial fisherman, the Sport Fishing Institute of British Columbia, and whale watching companies to design the survey and conduct fish sampling. The collaboration identified the best timing to conduct field work based on peak salmon availability and killer whale foraging behaviour.

“We got help from sport and commercial fisherman, chartered fishing vessels and used echosounders to detect the number and size of fish in the water”, said Dr. Sato. “Killer whales use a similar technique to locate the fish — only it’s much better than the electronic one we use because they can distinguish between different fish species in the water!” 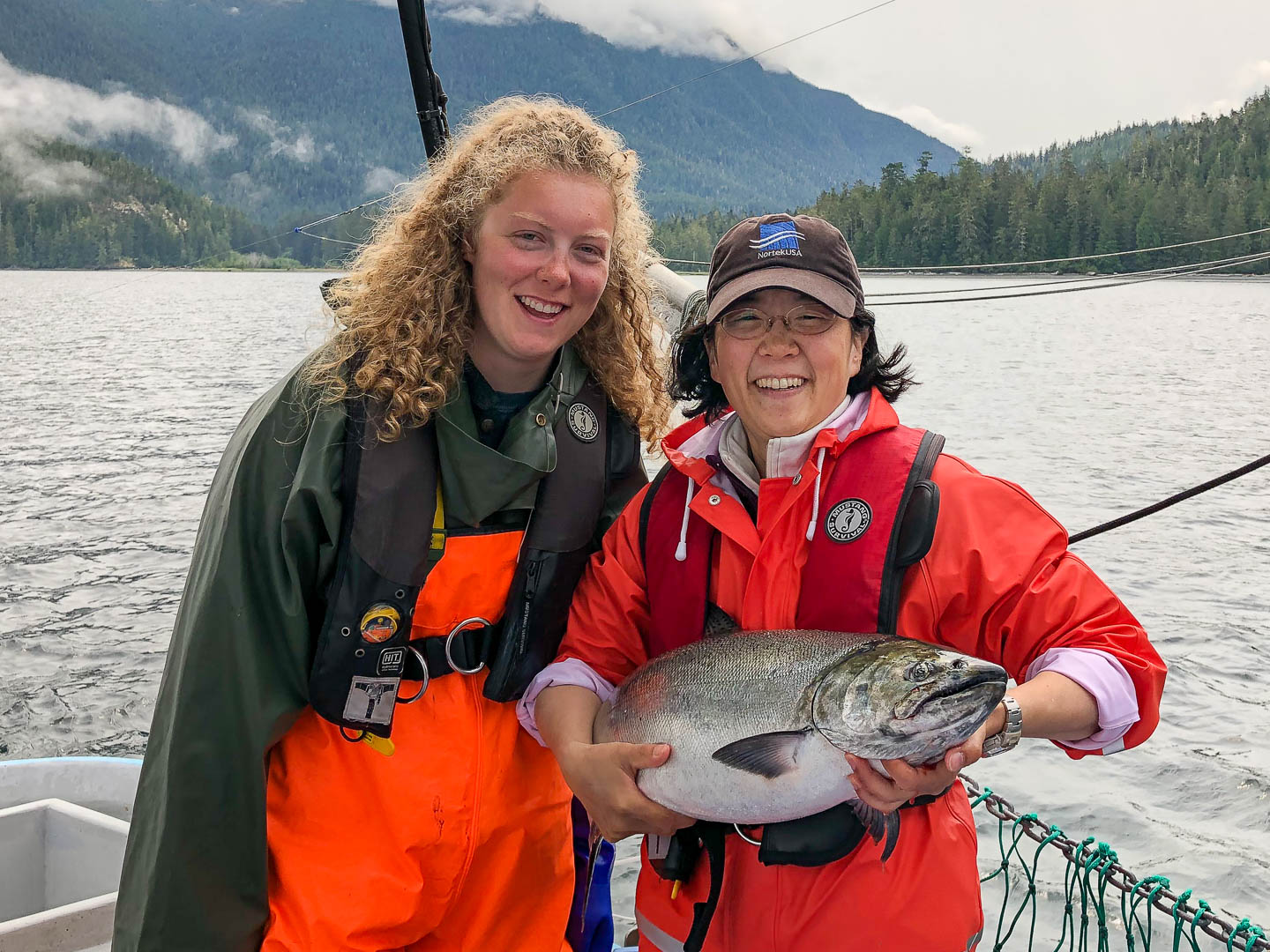 Verifying the type of fish detected hydro-acoustically was done by simultaneously catching fish seen on the sounder, such as this Chinook salmon.

The researchers found that while the distribution and sizes of fish were similar in both straits, there were four to six times as many fish in each patch in the Juan de Fuca Strait.

Estimating prey fields for resident killer whales is a tall order, and this is the first study to use acoustic surveys to estimate the relative abundance of large salmon in the Salish sea. Dr. Stéphane Gauthier, a scientist with Fisheries and Oceans Canada, believes that these measurements should be expanded, and that this study highlights the importance of assessing salmon distribution at sea using hydro-acoustics methods.

While the study looked at the availability of salmon, it did not assess other factors that might prevent the killer whales from catching the fish, such as higher vessel presence and noise in the Juan de Fuca Strait compared to Johnstone Strait.

Now that there is evidence that southern residents are not facing a prey shortage in their traditional summer feeding areas in the Salish Sea, Dr. Sato and Dr. Trites suggest that the focus of research efforts should be directed to other factors, areas and seasons.

“We don’t really know about prey availability outside of the Salish Sea and outside the summer season. To answer the question of whether there’s an overall prey shortage, we still need to figure out what’s happening during winter and spring, whether there are significant fluctuations year-to-year and in the different locations these whales travel to, like California,” said Dr. Sato.

The study was funded by Fisheries and Oceans Canada under research permits issued by DFO, NOAA and UBC.