It is more than just seals that are preying on the bounty of juvenile salmon exiting river mouths each spring.

Up to 50 per cent of juvenile salmon deaths occur when the young fish pass through a gauntlet of predators and damaged habitats on their way to the ocean. Exactly how all of these fish die has been a cause for concern, but now a UBC study has identified a bird species that may be scooping up oversized portions of B.C. juveniles: Pacific great blue herons.

What started out as a study to document the extent to which harbour seals are preying on salmon relative to other predators quickly went to the birds.

The discovery that great blue herons are a major predator of young salmon happened largely because of luck, said Zachary Sherker, a recent graduate of the Institute for the Oceans and Fisheries at UBC and the lead investigator of the study published in The Canadian Journal of Zoology. 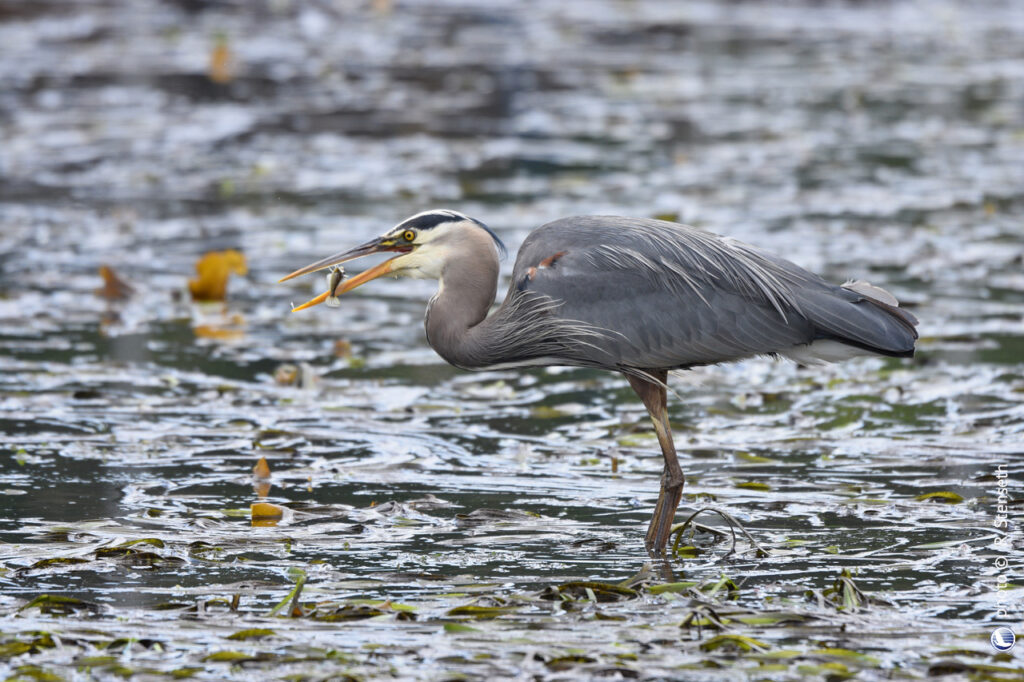 Pacific great blue herons are commonly seen feeding on small fish in shallow bodies of water, but have never been previously identified as a major predator of juvenile salmon.

Sherker had been looking for evidence of salmon being preyed on by marine predators like harbour seals, and well-known freshwater predators like raccoons, otters, king fishers and mink and hadn’t found anything, until a fateful boat trip with a local biologist.

“I was getting a ride to the seal haul-outs with a Cowichan tribe biologist named Tim Kulchinsky and airing my woes to him,” Sherker said. “He looked over and saw a bunch of herons foraging at the outflow of the river, and he said, ‘did you ever look at herons?’… That day I went over and found about 100 tags that came from juvenile salmon.”

Sherker uncovered this feature of the blue heron diet by scanning the forest floor of heron rookeries with a magnetic device that activates Passive Integrated Transponder (PIT) tags placed inside of juvenile salmon.

Over the course of the study, he located over one per cent of all 100,000 tags implanted in juvenile salmon migrating through the Cowichan, Big Qualicum and Capilano rivers. Some of the tags date back as far as 2008.

When considering the number of tags deposited outside of the heron nesting sites, Sherker and his co-authors estimated that heron predation may account for up to three per cent of all juvenile salmon deaths, and could be as high as six per cent in some years with low water-flow. 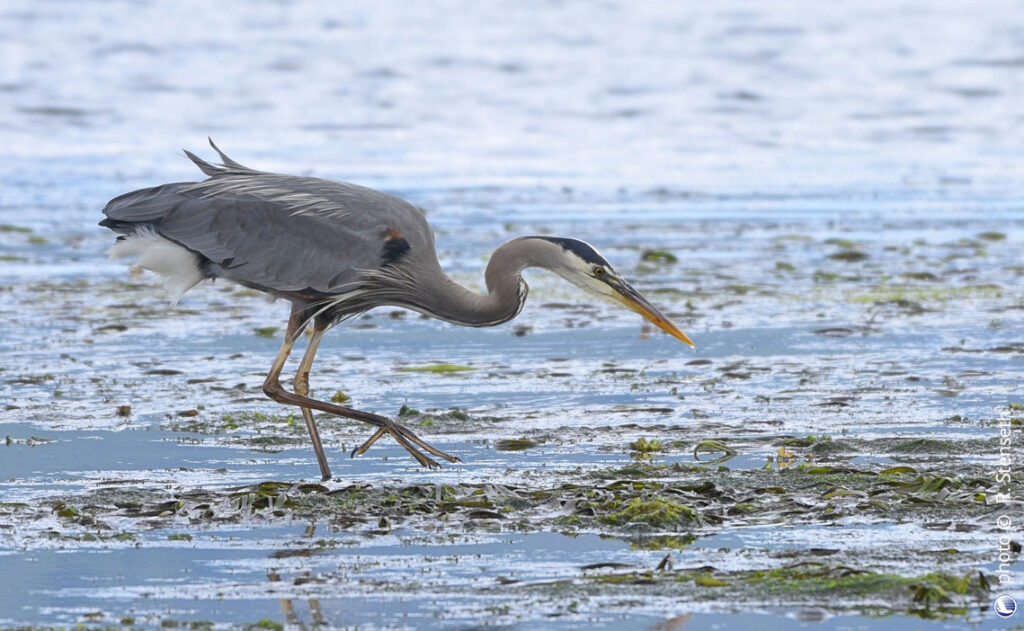 Always a stealthy hunter, great blue herons stand for long periods like frozen statuettes until the precise moment when they strike with deadly accuracy.

“I was most surprised to find that herons are foraging on smaller juvenile salmon. This is a bit of a shock given that visual predators often target larger prey items,” Sherker said. “The complicity of blue herons in the deaths of the young fish has been difficult to pinpoint, due in part to the fact that the digestive tract of the heron breaks down all parts of the salmon, including bones. Salmon remains in heron scat have thus eluded researchers”, said Sherker.

Because herons are consuming salmon in relatively high numbers, the study’s authors think that juvenile salmon, who are generally smaller than other prey species available during chick rearing, may be an essential part of the diet of young herons. Heron chicks are unable to open their mouths wide enough to swallow larger fish, suggesting that juvenile salmon may be a particularly important prey item during this time.

Knowing where young salmon are dying has become more critical as salmon stocks decline due to overfishing and changes to salmon habitats. Fortunately, however, herons aren’t likely to take all the salmon, and the fact that they prey on smaller, weaker salmon may even be beneficial.

“Herons may be taking out fish that were destined to die somewhere else along the way, but were going to live long enough to compete with other fish for potentially limited resources in the early marine environment. This predation could benefit salmon stocks by weeding out the weak and allowing for less competition and higher growth among other fish in these critical juvenile life history stages,” Sherker said.

The study’s authors suggest that heron rookeries near rivers should be monitored and heron predation on salmon be taken into account in future salmon recovery plans.

The study was done in collaboration with the British Columbia Conservation Foundation and Cowichan Tribes, and was funded by the Pacific Salmon Foundation with support of a Mitacs Accelerate grant.