New insights into the complex relationship between fur seals and pollock

A multidisciplinary team of scientists tracked the foraging patterns of northern fur seals to understand how they interact with walleye pollock, an important fish stock. What the researchers discovered may have significant implications for how the commercial pollock fishery is managed, and how declining populations of northern fur seals are protected.

Alaska’s remote Pribilof Islands are home to the largest breeding population of northern fur seals and some of the largest populations of seabirds in the North Pacific Ocean. Nourished by an apparent abundance of walleye pollock and other prey—the declines of seabird and fur seal populations breeding on the Pribilofs has scientists puzzled. Is there more to the relationship between these predators and their prey than meets the eye? To answer this and other questions, a diverse team of researchers participated in the Bering Sea Project — a large, interdisciplinary ecosystem study funded by the North Pacific Research Board — to gather critical data about top predators and their prey. Two of the inter-related studies, led by oceanographer Dr. Kelly Benoit-Bird, were recently published in the journals PLOS One and Marine Ecology Progress Series. They present a new understanding of how northern fur seals, thick-billed murres and black-legged kittiwakes behave with respect to their prey.
Three Top Predators
“We conducted field studies in the Bering Sea over two summers,” says Benoit-Bird. “In the first study, we wanted to determine the specific ‘hot spots’ where northern fur seals and two species of seabirds foraged for prey, and how they lined up with juvenile pollock in those areas. All three predators sought out small, dense schools of juvenile fish that aggregated within a larger prey field. We found that what matters to them is not the overall number of fish in a region, but how and where fish aggregate on a small scale.” 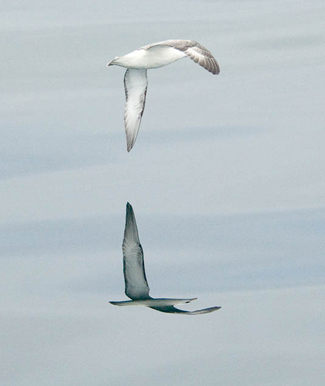 The small-scale distribution of prey, or patchiness, is a much better predictor of a predator’s success than an overall concentration of prey, says Benoit-Bird. In other words, a predator is more likely to find food if it swims from one dense patch of prey to another — like a baseball player running the bases, she says — than if it swims through one large, diffuse aggregation.
Benoit-Bird notes that many management practices take into account the differences between regional aggregations of fish — but often do not consider the patchiness within them. “For predators, we now know that how prey is distributed is critical,” she says, “especially when three key predators with very different foraging strategies give us the same message. It’s a much stronger statement.”
Fur Seal Foraging
The second study focused on the foraging behavior of northern fur seals, employing innovative tracking tags that logged each seal’s movements in three dimensions, multiple times per second. This provided Benoit-Bird and her colleagues with a sophisticated set of behavioral data that could be plotted against the location of pollock prey patches. “We learned a lot about the foraging behavior of northern fur seals, and some of it is really surprising,” says Benoit-Bird. “For example, previous studies that analyzed scat (feces) on Bogosloff Island showed that fur seals don’t eat very much pollock, but their foraging movements in the water are really focused on juvenile pollock. This tells us that they’re using juvenile pollock as a basis for foraging even while they’re searching for other things to eat, like squid or mesopelagic fish.”
Using her baseball analogy, Benoit-Bird describes the fur seals as swimming between “bases” of pollock, but perhaps doing their most important eating between the bases. “To me, this suggests that while pollock may not be their preferred food, this strategy provides a basic safety net if they can’t find anything better to eat.”
A New Way of Seeing
Benoit-Bird’s job as a scientist is to find the story in the data. At first, the data she and her colleagues collected told a confusing story. “We weren’t finding predator-prey relationships that made any sense,” she says. “We had to go back to the data and let the animal’s behaviors guide us to the right answer. The exciting part was saying to them, ‘Tell us what matters, tell us what you’re looking at, what was it that made you pick this spot?’ and then having them teach us a new way of seeing them.”

The Bering Sea Project enabled Benoit-Bird and her colleagues to study how multiple species interact in the same space and time, offering an unprecedented opportunity to collect and analyze multidisciplinary sets of data. This collaborative effort is lending new insights into the interactions between marine predators and their prey that could have profound implications for fish and wildlife management.
“We’re working with agencies responsible for assessing pollock stocks in the Bering Sea to optimize their survey protocols, so that they can accomplish their current objectives while taking into account new information from our science,” Benoit-Bird says. “Our work can potentially help them collect new information that we can analyze over time, giving better insights into long-term trends like regime shifts in ocean climate. We can’t go backward in time to the last oceanic regime shift, but we can think about how to move forward.”