Every October in Alaska’s remote Pribilof Islands, thousands of four-month-old northern fur seals take to the frigid waters of the Bering Sea. They don’t return for nearly two years. Exactly how they survive in those first two years remains a mystery, but scientists do know it is a critical period for growth and survival.If a young fur seal can find enough energy-rich food in summer, it can endure the scarce winter months. But how much food is enough, and what kinds of fish are best? Can we predict how much food an entire population might need?
These questions are at the heart of a new Consortium study that examines the digestive capacity of young northern fur seals. The study, published in the Canadian Journal of Zoology, gathered important baseline estimates of the maximum food intake levels of young fur seals, in summer and winter, and the consequences of differences in food intake during these seasons. 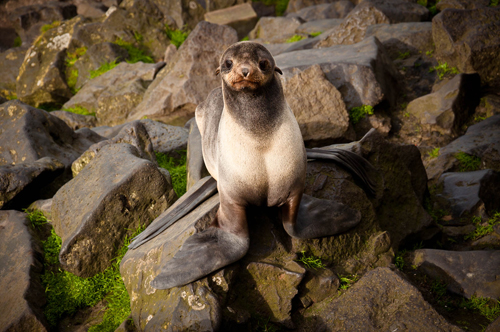 “Young animals are usually living on the edge at the best of times, and it doesn’t take much to push them over that edge so that they don’t survive,” says Dr. David Rosen (UBC Marine Mammal Research Unit), the study’s lead author. “This study gives us a better idea of where that edge might be and what might push them over it.” 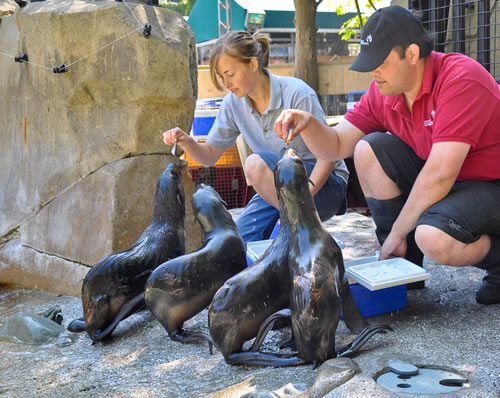 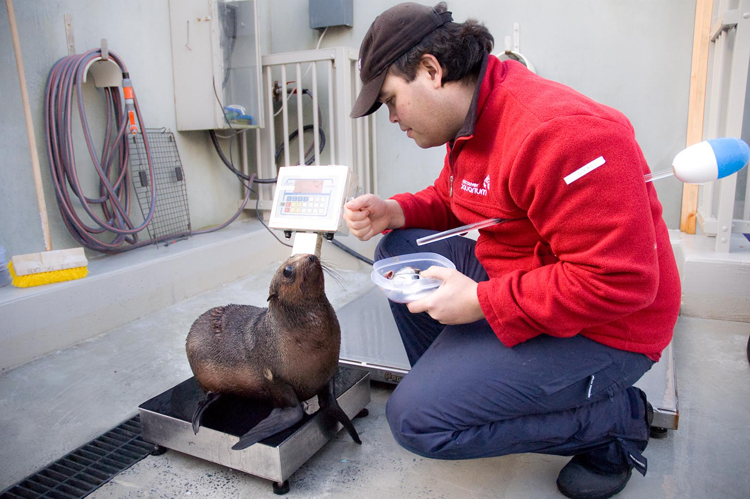 Satiation Study
Over three months, six female northern fur seals housed at the Vancouver Aquarium were given unlimited access to Pacific herring for eight hours a day. The seals were divided into two groups that were fed either daily or every other day, allowing Rosen and colleagues to study the effects of periodic interruptions in their food supply.The feeding trials were replicated in summer, when the seals were 10-13 months old, and in winter, when the seals were 17-19 months old.
The study produced three key results. First, the seals appeared to be satiated (or “full”) after consuming about 26% of their body mass in herring in summer, and 20% in winter. Rosen compares this to a food buffet: although people stack their plates full, there’s a limit to how much they can actually eat. The seals consistently ate the same amount in both seasons (2.9 kg/day), but Rosen says the consumption relative to body mass appears lower in winter because they typically weigh more in winter.
Second, the seals that fasted on alternate days did not eat more on feeding days to compensate for not eating the day before. The constant rate of feeding between the daily group and the alternating group was a surprise—the scientists had expected the seals to respond to an interruption in their food supply by eating more.

Third, the seals gained less weight in winter than in summer, despite an unlimited food supply and consistent feeding rates in both seasons. “Surprisingly, when the seals ate more food, they didn’t convert that into growth very efficiently,” says Rosen, pointing out that growth is not just regulated by how much food is eaten, but also by how their physiology uses that food.
“In the summer the extra food they were eating turned into higher growth rates, but they’re down-regulating their physiology at times of year such as in winter months when they’re likely less able to find high-quality prey,” he says. “They’re just not set up to process huge amounts of food in winter, and it was probably just passing through their system.”
Data for decision-makers
The seasonal changes in growth and in food requirements for northern fur seals have important implications for wildlife managers, Rosen says, who suggests that food resources such as fish stocks need to be managed on a seasonal basis. The baseline data produced by this study are useful in ecosystem models that attempt to forecast the interactions between northern fur seal populations, their prey and their environment.
“We normally don’t have the opportunity to see northern fur seals at this age because they’re at sea,” Rosen says. “We learned that they really need to eat certain amounts of prey at certain times of year because that’s when they’re physiologically programmed to grow. They’re like a revved-up engine, and if they don’t get the fuel they need, they lose body mass and become less healthy—and they might not be able to make up that deficit later in life.”